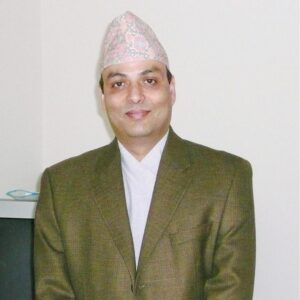 Biography – Kailash Raj Pokharel
Mr Kailash Raj Pokharel is a professional in international affairs, economic diplomacy including foreign aid, trade and investment having wide range of working experiences in the Ministry of Finance, Ministry of Foreign Affairs, Ministry of Industry and Commerce as well as working in international prominent institutions such as the World Bank and the United Nations.
In his 40 year long career in the Government of Nepal, which started as an officer in the Ministry of Industry in 1987, he went on to serve for 27 years in the Ministry of Finance starting from 1993 working in various capacities in the Budget, Revenue and Foreign Aid sectors. He served as a Budget and Program Officer, providing valuable input in formulating the National budget particularly in infrastructure and educational programs and involved in monitoring of those programs as well. He worked as a key person in reforming the budgetary systems of the Government of Nepal.
For nearly a decade, 2006 to 2015, he worked as an Under Secretary in the International Economic Cooperation and Coordination Division (IECCD), in the Ministry of Finance, serving in leading capacities in various negotiations with International Donors as well as management of various aid programs. He also spearheaded the Nepal Performance Portfolio Review (NPPR) as National Coordinator of the program. He was deeply involved in project formulation, negotiations, facilitate implementation and monitoring. He visited Australia and New Zealand in 2013 as member of Nepali Team of Agriculture officials sponsored by Asian Development Bank exploring the technical advice in agriculture sector particularly fruits, vegetable, diary.
His international exposures began as an Investment Promotion Official in United Nations Industry Development Organization (UNIDO) in Tokyo, Japan in 1992. He was interviewed by renowned Japanese newspaper, Ashai Shimbun about Nepal’s investment promotion in Japan. In 2000, he was selected, through global competition, in the United Nations Transitional Administration in East Timor (UNTAET) where he served for over 2 years as a Civil Affairs Officer(P3), working on building civil administrative services from the ground up in a newly formed nation.
From 2004-2006, he served as an Advisor to The Executive Director in The World Bank Board of Directors, in Washington, DC, USA, deeply engaged in advising the board on numerous projects to be approved by the board and on corporate reform of the Bank’s policies.
From 2015 onwards to 2019, he served as Economic Counselor in the Embassy of Nepal, Washington DC, USA where he worked on promoting bilateral economic cooperation with the United States and various programs related to aid, trade and tourism. During his tenure, he successfully lobbied in US Congress for a specific Act for Nepal related to Duty Free exemption for Nepal-made products exported to USA. Additionally, Trade and Investment Framework Agreement (TIFA) bilateral meetings, which were stalled for numerous years, were resumed and were held in USA and Nepal regularly.
From 2020, he worked as a Joint Secretary in the Office of Prime Minister and Council of Ministers coordinating the Government policy formulation and implementation in economic and infrastructure sector. He got normal retirement from civil service in September 2020.
Mr. Pokharel graduated in 1984 for his Bachelor’s Degree in Economics in Tribhuvan University, Kathmandu with Gold medal. He secured his Masters’ degree in Public Administration from Tribhuvan University, Kathmandu in 1988. He also received his Bachelor’s degree in Law in 1990.
In his long career, he has travelled to over 46 countries. He has also published numerous articles in leading print and online newspapers in Nepal.
Mr. Pokharel is born in September, 1962 in Okhaldhunga District and raised in Kathmandu, Nepal.
He is married with Basudha Nepal Pokharel and has one son Dr. Ankit Pokharel and Daughter-in-Law Dr. Merina Regmi Pokharel.

This is not for e-passport booking.

Please make sure to book the appointment under the correct service category. Embassy will not be able to provide the service if the appointment is booked under different category regardless of any circumstances. Further, be advised that the service duration is indicative only. Thank you !

Remember to reschedule/cancel  the appointment if unable to attend / no longer required.