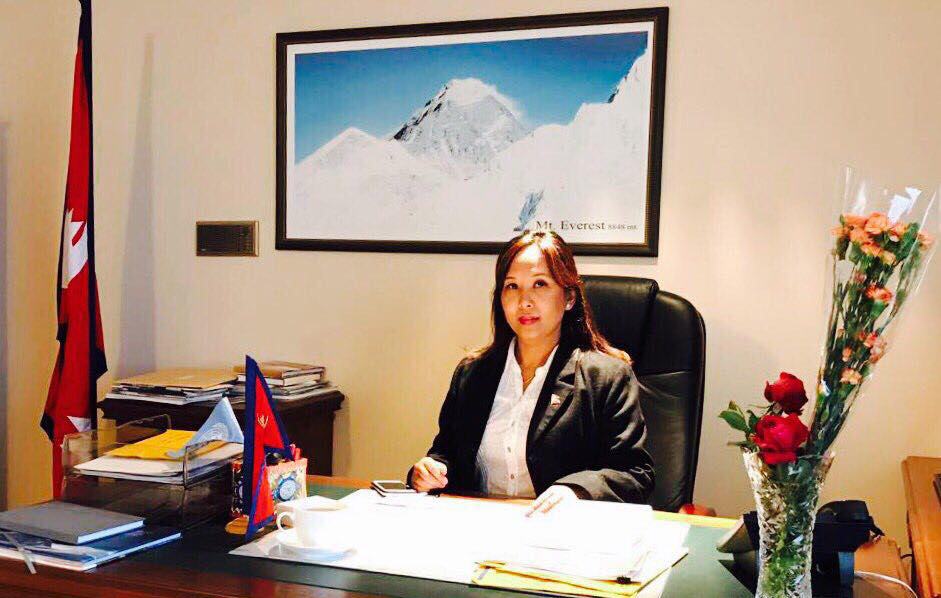 Ms. Lucky Sherpa is the first indigenous women to be appointed as an Ambassador from the Government of Nepal. She was former member of the Constituent Assembly and Parliament of Nepal (from 2008 to 2012). Ms. Sherpa is also first among her (Sherpa) community to reach the politburo level (MC) in the party politics of Nepal. While in Parliament Ms. Sherpa was a member of International Relations and Human Right Committee.

Her passions for economic empowerment of women and marginalized community and promotion of human rights have brought her to play leading roles in many national as well as international organizations. She has played important role in conservation of bio-diversity and protection of environment. Ms. Sherpa has led the Parliamentarians Network on the Environment, GLOBE Nepal- a member organization of Globe International. She is also an International Steering Committee member of the Climate Vulnerable Countries network.

She has been an adviser of many national as well as international networks and organizations dedicated to promote green development, inclusive democracy, human rights and the rule of law.

She has received many awards from a variety of national and international organizations. Ms. Sherpa was honored with the recognition of ‘Youth Ambassador for Peace’ for 2007 and ‘Young Women Human Rights Leader’ by the World Youth Federation for Peace, Korea and MADRE, an International Women’s Human Rights Organization, USA, respectively.

She was also the first female graduate from the indigenous Sherpa community to hold a Master’s Degree in Economics and was the faculty’s top student for 2001 from Patan Campus of Tribhuvan University. Ms Sherpa has participated in many international training provided by ILO, UNDP and a very recent program at Harvard University on Political Leadership organized by the US Embassy in Nepal and the Karuna Center for Peace Building in Washington D.C.

This is not for e-passport booking.

Please make sure to book the appointment under the correct service category. Embassy will not be able to provide the service if the appointment is booked under different category regardless of any circumstances. Further, be advised that the service duration is indicative only. Thank you !

Remember to reschedule/cancel  the appointment if unable to attend / no longer required.